As of version 3.7.9.0 Prodoc now has a featured named Quickdox which is a function that allows you to save profiles of documents to be processed.

It can be found within Process All Documents on the Forms section of a shipment as shown below: 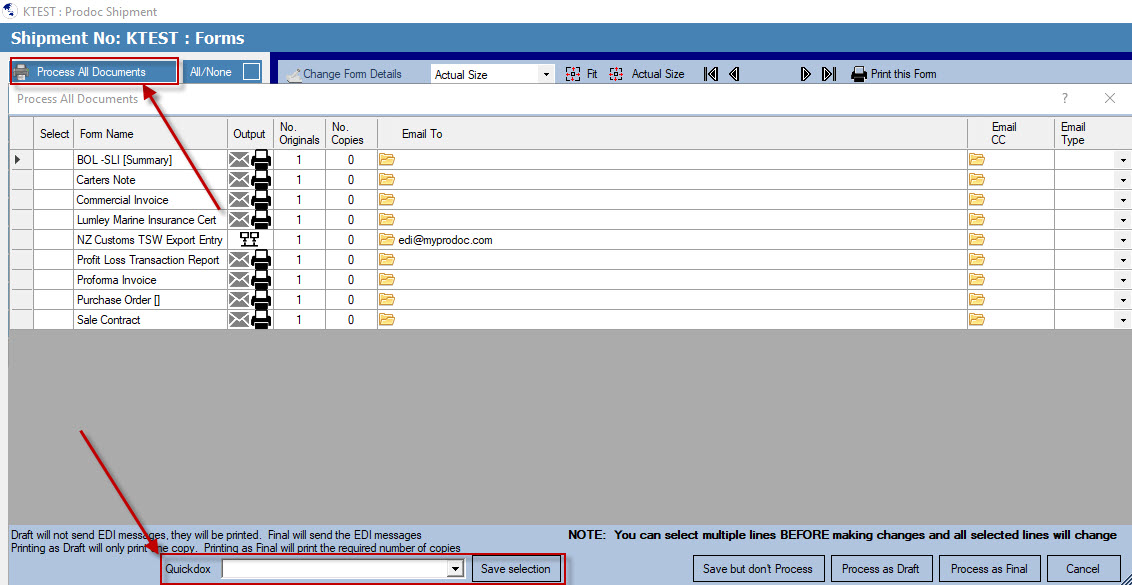 Quickdox saves the profile (different selection options, such as ticks, copies, originals, output and email address etc) of documents as they exist at the time.

If you have two forms added, a Master Document and a Covering Letter and you tick both of these to process, set them to email and enter an email address (say, your own), you can save this selection and recall it later. The advantage of this is the ability to create a shipment, press ‘Process All Docs’, select your profile and hit Process as Final without consideration.

However it saves the settings for the forms, it does not save which forms are currently present. What this means, is that if the form has not yet been added it will not add it. It will only modify a form that already exists. For example, if you create a shipment which loads the Master Document and Covering Letter automatically, then also add a Commercial Invoice, set its profile and save it to Quickdox. The next shipment you create you will still need to manually add a Commercial Invoice if you want the Commercial Invoice Quickdox profile to apply. 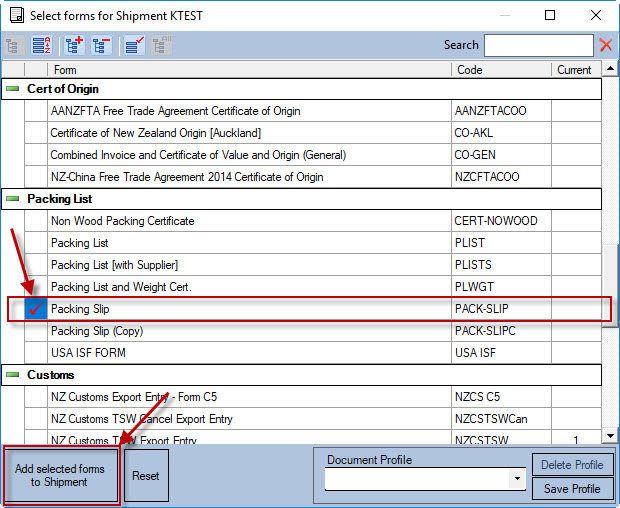 If a form is missing from a saved profile, it does not add that form, it only applies the saved fields against the matching forms that exist.

This would significantly improve the workflow if you, say, needed to send a copy of all documents to another team member to verify prior to sending to the Customer. You could create a profile with their details and upon shipment creation (wherein default forms have all been applied) you could immediately jump on forms and select the Quickdox Profile you’ve created called ‘Send for Verification’ and hit Process as Final.

Quickdox is primarily intended for use with like shipments (for example, same automatic document profile which is usually same exporter, same customer etc depending on how your Form Setup is configured). This is due to it not adding or removing forms and just altering instances of existent forms.

Profile loads all saved instances against each relevant form

Changes are only applied to forms saved within the profile.

Get in contact if you have any queries on how Quickdox works that haven’t been sufficiently answered here. We’d recommend you experiment, when applied to an actual workflow you may find ways of using it we haven’t realised.